Drawing a Blank by Aaron Ehrenhaft

It was time for another change up. Somehow, this book reminded me very much of the Man in the Ceiling by Jules Feiffer. It had similar themes of escapism and the whole nice ending thing working for it. Only, there was a lot more light-hearted moments in this one.

The story is about a boy and - as the subtitle says - how he tried to solve a mystery, end a feud, and land the girl of his dreams. Seems like a pretty 2-dimensional kind of story with one dimensional characters doesn't it? Well, let me tell you it is not. You learn about random things like Bentham's Panopticon and words like misogynist and misanthropy. Teenagers, especially the guys would enjoy this book.

This is a book that you want to pick up after a long day at work or at school and chill out and read just to relax and laugh. People who love utterly random and slapstick humor will enjoy this book. And if you have this thing for accents, well, let's just say, " Well, what are you waiting for? Pick that book up!"
Posted by Erica T at 12:09 AM No comments:

Noughts and Crosses by Malorie Blackman 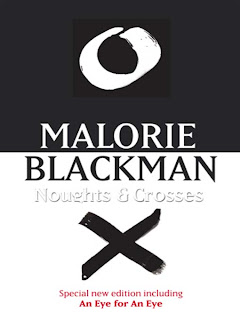 This is by far the most psychologically and emotionally distressing book I may have ever read. Don't get me wrong though it was an excellent read and extremely immersive. However, it is definitely not something you read and expect to have a pleasant night sleeping. I've had really disturbing dreams for two nights in a row as is.

What's great about it is the concept of the book. In the world of the book, the people that were considered the 'slave-race' and discriminated were those with white skin and fair hair whereas the brown-skinned people were the ones in charge. I had a paradigm shift just reading it and I'm not even African American. What more if a white man picks this book up to read.

Basically the story is about two children - a Nought and a Cross - called Callum and Sephy growing up in a society where hatred and discrimination among both races run rampant. But how can they take control of their lives and be together if the society they live in is so immersed in their own feelings of hatred and helplessness?

Experiencing racism that you associate with the blacks through a white man's eyes gives one a lot of food for thought. It also makes it a very painful read because you're experiencing the character's pain. I think that's why I could not sleep because I felt so distraught and the impact the book made was so immense that it manifested itself in my dreams.

Usually, I try to keep a post about a book as objective as I can. However, as I have mentioned, it is written through the characters point of view and the scenarios and outcomes were so realistic and well-thought out I may as well have been reading an actual biography.
Posted by Erica T at 1:08 PM No comments:

I Have Not Stopped Reading...

I just have yet to write. I'd just like to welcome Alicia to All Books Great and Small. I was very surprised to see we had yet another follower in our ranks! A small victory but a victory nonetheless. *wild cheering in background*

I have read a whole bunch of books while I was away in Australia. Even now as I am back in Malaysia. Just need to find the time to write in between all the normal routines that keeps food on your table. Will get to that soon.
Posted by Erica T at 11:51 PM No comments:

The Gods of Amyrantha by Jennifer Fallon 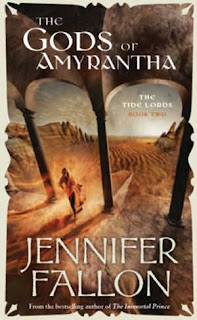 And the plot thickens... like mash potato gravy and just as yummy. Did I also mention that Jennifer Fallon herself has seen the review of The Immortal Prince? All us people at All Books Great and Small feel very honored to have had it featured in her blog. Check out her website! It's awesome!

We last left the story at the point Cayal saves Arkady from certain death. The second book starts off with a prologue giving the us readers a taste of the Immortals' cruelty and a stark look at the nature of their ability to heal unconditionally adding urgency to the fact that the Immortals must be killed. What was ironic was that in this same prologue, one can see the cruelty that humans possess.

Arkady and her husband Stellan are exiled to the capital of Torlenia ironically, for helping the crown prince get out of trouble. In the meantime, Jaxyn Aranville, Stellan's lover, is making plans to move in on the throne which are not going as smoothly as he would like it because Diala, another immortal posing as Stellan's niece, is one up on him because of her marriage to the crown prince. As they both make their move to dispose of any other heir to the throne, Stellan and Arkady suddenly find themselves under arrest for high treason. The millenia old question then remains... will mere mortals be able to find a way to rid themselves of the machinations of the Immortals?

Another sleepless night worth spending. The Gods of Amyrantha keeps you on the edge of your seat, breathless in anticipation of what will happen next. This is a series that is worth following closely. The Immortal Prince was captivating and this second instalment has yet to disappoint! A beautifully woven tapestry of words!
Posted by Erica T at 8:40 PM No comments:

Finished this one last month. I finally have a little time to write about it. I'll be blunt. It was twisted, cynical and utterly mind boggling. That being said, I think it was a pretty good read! Naked is a collection of short stories detailing parts of Sedaris's life. Though some of the incidents he talks about are fairly mundane, his take on them creates this bizarre twist. He takes you through his world of constant hitch-hiking (he refuses to drive in Chicago), kids and X-rated reading material, making friends with the physically challenged, the harmless white lies that all parents (especially dads) tell their kids, and... wait for it... nudist colonies. Reliving his life was quite the experience. Though his brand of humor doesn't quite suit my taste (as I only found one of his stories particularly humorous), those who enjoy cynicism and sarcasm at its twisted best would do well to pick up this book. Our latest addition to the team, (Bagus) would be a great example.
Posted by Hakanai-hane at 11:30 PM No comments: 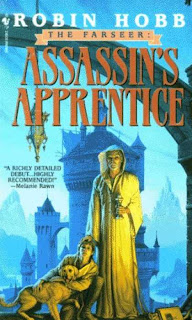 This week All Books Great and Small will be featuring a very special book review written by Bagus Wibadsu Sosroseno. It's also our first review of a trilogy! Enjoy...

When it comes to the high-fantasy genre, there are only a few books that dare to break the boundary set by the late J.R.R. Tolkien; that is to say, most fantasy books somewhat adhere to some unwritten rules when it comes to the storyline and the characters; and can be quite clichéd.

And The Farseer Trilogy is one fine example of a story that broke that boundary. Set in a fantasy region of the Six Duchies, enter Fitz Chivalry, a bastard son of Prince Chivalry, who was supposed to inherit the throne to keep the Duchies united. Raised as both an embarrassment of the royal bloodline and a threat to the throne, Fitz is thrown right in the middle of an uncomfortable political situation. On top of that, The Six Duchies, throughout the whole story arc, is being raided by the mysterious Outislanders, whose sole purpose seems to be the destruction of all the 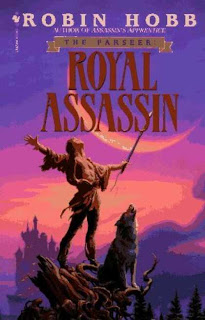 The most intriguing part in the book is reading about Fitz, the main character, trying to grow up amidst all the drama and politics surrounding him since his childhood. And, like normal people, Fitz underwent plenty of painful moments, and we are not spared by the author when it comes to tear-inducing dramatics. At times the story can be really painful and depressing, and you can’t help but feel sorry for Fitz, and you’ll find yourself silently saying, “You can do it Fitz!” In the end, Fitz emerges as a hero that is scarred both mentally and physically, and his ultimate triumph is sacrifice. 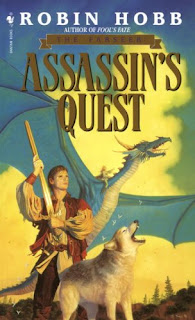 This trilogy (Assasin’s Apprentice, Royal Assassin, Assassin’s Quest) is a great read. It is way up there in terms of character development (which is really rare in the realm of high-fantasy), and the author leaves nothing, nothing, undone. The ending, though I won’t spoil it, is also different, if not a bit on the tragic side. Go and buy it, if you haven’t already.

The Immortal Prince by Jennifer Fallon 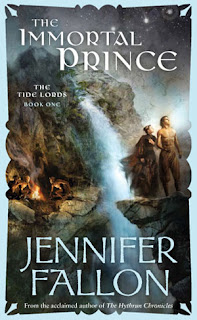 This book is awesome! Character driven, an elegantly complex plot and a unique concept - learning about immortals. You couldn't ask for more! Jennifer Fallon is one of the greatest fantasy authors of this age. The Immortal Prince is the first book in The Tide Lords, her first four book series.

The story begins with an immortal, Cayal, looking for a way to die. He murders seven people for that sole purpose and is sentenced to death, to his utmost disappointment, by hanging.... The executioner who beheads people was on vacation. Arkady, the Duchess of Lebec and historian, is then sent in to prove that he is lying about being immortal. Things start to get messy and she helps him escape from prison. It is then she discovers Cayal is telling the truth and is forced to confront it. When she does, she discovers the complexities of being immortal and their ruthless ambitions to rule Amyrantha through a religion or an existing government - it's more effective and a lot less of a hassle.

This is a great book for all fans of adult fantasy. the characters are complex an intriguing and drive the plot to unexpected twists and turns. Expect to empathize, pity and hate these seemingly inhuman immortals. Oh... expect to stay up late reading this book...

And stay tuned for the review of her second book: Gods of Amyrantha
Posted by Erica T at 2:52 PM 3 comments:

Since Hakanai-hane and I love fantasy novels - namely 'The Lord of the Rings' by J. R. R. Tolkien - we have decided to create a ranking system based on that. It makes things a little more interesting after all. Here's a guide to help you understand it.

We have a section with shortcuts so if you want to just pull up reviews based on authors or rankings, feel free to click on it!